My take on the East Coast Greenway from Trenton to Philadelphia

Posted on September 19, 2017 by alliumstozinnias

UPDATE: The section from Trenton (well, Morrisville) to Bristol is dramatically better. Read about our 2019 ride to an award-winning brewery using the new East Coast Greenway route.

ALSO: There’s some nice riding on the New Jersey side from Trenton to Camden.

I’m going to be blunt: This stretch of the East Coast Greenway is desperately in need of improvement — i.e. trails. I’m told that’s coming, but for now this is a one-star section.

This is a saner section.

This was all urban riding– no trail, no suburban residential streets, nothing to give you a break from city biking and city traffic. To be honest, our “Portugal to India” ride, from Newark to Metro Park and then onward to New Brunswick was more pleasant and more interesting — and that’s not something most people associate with North Jersey, let alone Newark.

We started out from downtown Trenton aiming for the Calhoun Street Bridge. At one point, I thought we were headed for a busy highway, but the road forks in an odd spot and dropped us on the bridge. Chaotic Jersey road design and signposting, I thought…

At least the view of the Delaware River from the bridge was pretty:

On the Pennsylvania side, we picked up state Bike Route E (as in East Coast Greenway) … but don’t be fooled. This is hardly great bike infrastructure. Oh, it started out OK. West Trenton Road looks like a main suburban road, but it’s wide and there wasn’t much traffic. After several miles, though, we were on State Road 413. This is for hardy cyclists only; think wide, major road with strip malls, plus crossing an intersection with a road leading to Interstate 276 and of course traffic coming off the interstate too. Drivers saw us coming, so nothing scary happened. I know this is the reality of a route that connects cities rather than sticking to the middle of nowhere — there is always a bad stretch. The good news is that the route will look very different in four years when some projects are finished (pardon my cynicism when I bet it will be 6). Certainly the map showing the future ECG route looks much more appealing.

2019 UPDATE: The remaining obstacles on the D&L trail between Morrisville (opposite Trenton) and Bristol have been removed this year. It’s now a clear trail for 10 miles — and you stay off what we experienced above. Here’s a report of our 2018 experience.

I just kept wondering who’d get a flat from the junk on the shoulder.

So I was quite surprised when Bristol Pike — U.S. Highway 13 — turned out to be far nicer. For one, it was freshly paved. And there was a bike lane. It even felt fairly sane. I thought we’d be cruising. 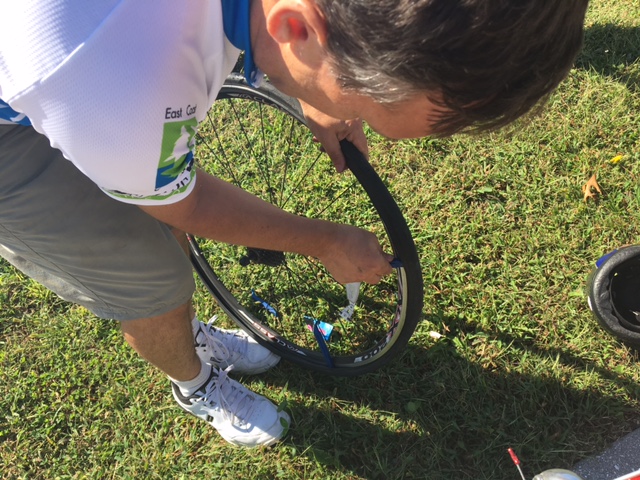 But then one of us got a flat. Yes, of course it was the rear wheel. We pulled over on the sidewalk in front of a used car dealership to swap out the inner tube. The two men working there wandered over to see what was up. They nicely offered us water, use of the restrooms … but also gave us a different perspective on Philadelphia.

Business is slow, I heard, and it’s due to the bad economy — in this case, too many drugs. And these days, drugs means opioids and heroin. We apparently had just gone through a town with lots of (unregulated) halfway houses for addicts who had gone through substance-abuse treatment and were not far from a north Philadelphia neighborhood that he described as the epicenter of the opioid crisis. He never went into Philly without his gun, and he warned us to be careful. We thought he was a bit OTT and we certainly weren’t going to go find ourselves some guns.

Not that our route went through that part of town anyway. We stayed pretty close to the Delaware River but only once actually saw it. That was when we did our special Relay task and collected our sample of Delaware River water in Pleasant Hill Park. We found a bit of trail … but then it’s blocked by the Police Department not wanting anyone near its gun range (not that we heard any shots). Also OTT.  This says safety upgrades would mean that section would open in the summer of 2017, but obviously that hasn’t happened. (We did make it through that blocked section in 2018, known as the Baxter Trail — it’s now open on weekends only in the summer.)

Apparently there are a number of unconnected trail segments along the northern Delaware River, and I’d hoped we’d have been able to ride some of them. But nope. Gaps supposedly will be closed in the coming years. Certainly the people of north Philadelphia deserve more trails as well as access to the waterfront. And the East Coast Greenway would have a more direct and scenic route that also would serve riders of all abilities.

And so we stuck to city roads, biggish ones like Torresdale, Frankford and Aramingo, moving away from the waterfront and then back toward it, finally reaching hipster Northern Liberties. Then it was onto the bike lanes on Spring Garden to the Schuylkill River and the train home. Total mileage, including getting to and from our train station and then from the Trenton station to the start: 44 miles.

Did we miss something that would have made the ride more rewarding?

Thank you, East Coast Greenway and Bicycle Coalition of Philadelphia, for working to create new trails and upgrade the route. Thanks, too, for the bike lanes we found! And thank you Riverfront North for doggedly working to make the waterfront accessible to all from the Philadelphia county line to the Frankford Boat Launch, and the Delaware River Waterfront for picking up the trail work there headed south.

“Trenton Makes, the World Takes” — or at least it used to be that way

What’s is like if you stay on the New Jersey side down to Camden and then cross the Delaware using the Ben Franklin Bridge? Here’s how to do it.

A gardener (along with the Brit) who has discovered there is more than hybrid tomatoes. And a cyclist.
View all posts by alliumstozinnias →
This entry was posted in bike ride, bike trail and tagged East Coast Greenway, Pennsylvania, Philadelphia, Trenton NJ. Bookmark the permalink.