Posted on October 8, 2018 by alliumstozinnias

When you think New Jersey, Bruce Springsteen has to be high on the list.

So I can’t explain why it took me so long to come up with the idea of a Springsteen bike ride, given that I live in the state. But I finally did this year, after being one of the lucky ones to see him on Broadway.

My ride focuses on Freehold, where he grew up, and leaves out Asbury Park, the Stone Pony and other Shore points. The borough doesn’t mark Springsteen spots, but if you’ve read his autobiography, you know some of the highlights. Or use this article as your cheat sheet. Or this one.

Think of this ride as a search for the ghost of a young Bruce, to mangle “The Ghost of Tom Joad.”

I’ve got two options to get you to Freehold — a longer road ride that requires comfort with traffic, and a shorter ride using the Henry Hudson Trail.

We took the road option. From the Princeton Junction train station, plan on about 25 miles each way. (If you want  a shorter ride, consider parking at a shopping center in Monroe Township or even James Monroe Park on Dey Grove Road.) We went through Cranbury; Google Maps takes you through Hightstown. Either way, once you get to Woodward (later Main Street in Tennant), traffic really picks up, even on a Sunday morning. And there’s no proper shoulder for some of it. Be warned. (Turning those unused railroad tracks into a trail would be a game-changer…) The good part is you’re less than 5 miles from Freehold once the bad stuff starts.

After the 1778 Battle of Monmouth battlefield, we rode under Highway 9, immortalized in “Born to Run,” before crossing Main Street and then the railroad tracks into what looks like the poorer part of town. If you’ve read the autobiography (and I recommend listen to it instead, because you get the added experience of hearing Springsteen read his words), you know it was pretty much this way when Bruce was growing up.

His early life centered around St. Rose of Lima Church, where we began our Springsteen pilgrimage. The imposing brick church, the church school (which Springsteen attended through 8th grade) and assorted church buildings take up the better part of a block. Springsteen first lived next door, at 87 Randolph Street, with his parents, sister and grandparents in a house that has been torn down and turned into the church parking lot.

When the Springsteens moved, it was a few blocks away to 39 1/2 Institute Street. I remain amazed that there was no hot water upstairs, per his autobiography. This, in the 1950s, in the richest country on Earth!

When you’re on Institute Street, keep going one more block … to E Street. (No, that’s not where the band’s name comes from … that’s E Street in Belmar, at the Shore. We guessed this is a nod to Bruce’s fame.)

The Springsteens later lived at 68 South Street, still within a few blocks of the church. The house is bigger, but the street is lots noisier too. I’m not sure if this was a step up … or down.

People still live in these homes today, so we didn’t want to disturb them. I just snapped a photo and moved on.

Then we biked through downtown to take a look at Freehold High School, his alma mater, before heading to Federici’s, an Italian restaurant on Main Street. Go for the impressively ultra-thin-crust pizza. Bruce apparently likes it too. We had been in Freehold in 2011 to check out the Metz Bicycle Museum (an amazing private collection that was broken up and sold following Mr. Metz’s death, alas, and unknown to us was housed essentially around the corner from the Springsteen ‘hood), and I remember one of the locals telling us how Bruce had attended a high school reunion event there and had picked up the tab.

Downtown Freehold is a mixed bag. Lots of traffic rumbles down Main Street, but there’s no sense that this is a hot destination. There’s restaurants for the county courthouse crowd, but also empty storefronts. At least it may not be quite as dire as in “My Hometown,” where he sings:

UPDATE: Bruce told Jimmy Fallon in December 2020 that his first gig with a band was at the Freehold Elks Lodge and he played “Twist and Shout”. That, it turns out is just up the street from Federici’s and a handful of blocks from Freehold High School. I figure we biked past it without a second glance.

Dessert was Jersey Freeze, where a neighborhood runs into Highway 9. Bruce as a child may have liked empty cones best, but not me. When Springsteen was a kid, it was just soft serve, either chocolate or vanilla. Today there’s ice cream too, and plenty of flavors to choose from. A rich chocolate ice cream, or one with bits of apple pie? We opted this time for seasonal. 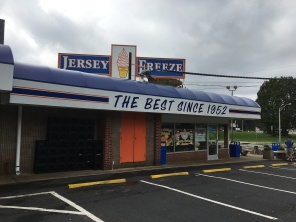 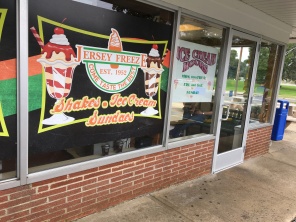 Then it was time to head home, going back under Highway 9 and past St. Rose of Lima Cemetery, where his father is buried, as are the grandparents he lived with in that first house. We tried a different, more northerly route that, honestly, was less pleasant than the way we’d come, even with no-shoulder Woodward. More county roads, less quiet time. And that’s without the hill. Don’t try it.

And the trail option I promised?

Head north of Freehold to Marlboro and jump on the final, five-mile segment of the paved (and road-bike-friendly) Henry Hudson Trail. It dumps you out on East Main Street, next to the Shell station. Then turn right and you’ve got perhaps a mile on Freehold streets (past the Elks Lodge) to the heart of downtown. 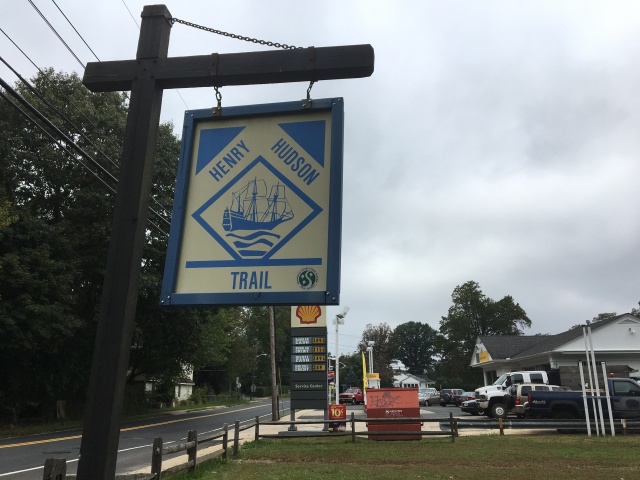 There’s more of the Henry Hudson Trail if you want to start even further north and can handle a bit of road. You could even come from Atlantic Highlands, where there is ferry service from New York City. All told, it’s 24 miles. Here’s the map.

Whatever you choose, just remember — to mangle another Bruce song —  that tramps like us, baby we were born to bike.

A gardener (along with the Brit) who has discovered there is more than hybrid tomatoes. And a cyclist.
View all posts by alliumstozinnias →
This entry was posted in bike ride and tagged Bruce Springsteen, Freehold New Jersey, New Jersey. Bookmark the permalink.