Posted on August 31, 2015 by alliumstozinnias 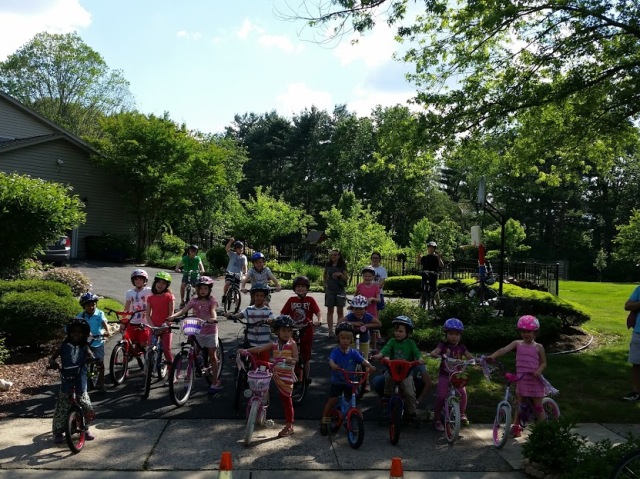 Bicycling magazine is asking everyone to get just one nonrider on a bike with its #GetSomeoneRiding campaign.

I’ll claim credit for getting a neighbor riding — and now she calls herself a bike evangelist. She’s gotten her daughter riding, then her husband — and now some relatives, after taking them on a trail in Connecticut that is part of the East Coast Greenway.

I have colleagues who think it’s insane to bike in New York City because it just doesn’t feel safe. I say try the Hudson River Greenway, look at the bike maps for bike lanes and start with that.

But this is why I love the East Coast Greenway project. It’s about linking trails and linking cities, and it helps inspire cities to do more (because the East Coast Greenway, as awesome as it is, isn’t enough). Too many bike lanes and trails just … end. And that is frustrating for anyone seeking a safe way to get to where they’re going without a car.

Today I led the neighborhood kids around the block in a bike parade, led by some of the soon-to-kindergartners. And then I helped a 3-year-old start to get the hang of pedaling on her bike with training wheels. She has no tricycle experience, so she’s still learning the concept of pedaling. But hearing her joyous laugh as I helped move her legs and she saw she was moving on a bike, just like the big kids … priceless.

Soon she’ll be pedaling on her own and be one of the 300 million reasons we need trails and other safe places to bike.

A gardener (along with the Brit) who has discovered there is more than hybrid tomatoes. And a cyclist.
View all posts by alliumstozinnias →
This entry was posted in bike ride and tagged #GetSomeoneRiding. Bookmark the permalink.