Posted on November 13, 2018 by alliumstozinnias

Today’s highlights: the Georgia Coast Trail in Woodbine, the “submarine” outside a military base and tagging along with Brent for his talk about the East Coast Greenway to about three dozen people at a meeting of a military officers association in St. Mary’s. Only a few of them may want to get on their bikes, but they certainly could appreciate the dollars from filling around 30 rooms at a locally owned, non-chain motel.

Once again, worries about the weather were unfounded. No rain. We finally got the sun and heat we were expecting (while there’s snow in the forecast at home — glad to be missing that!)

The Georgia Coast Rail Trail in the tiny community of Woodbine starts at the banks of the Satilla River and follows part of an abandoned railroad line for about 3.5 miles. The hope is that one day it will follow even more of it — perhaps 68 miles. Imagine a straight shot from Waverly to Woodbine, for example. Now that would make Highway 17 far more pleasant! Though I enjoyed our quiet roads when we turned right from Waverly (one gas station, one Dollar General.)

Love the look from the water:

This is the look further down the trail:

And how can you not like a town when one of the sheriff deputies spots you turning onto the road just before the (steep) bridge and rides behind you to keep motorists from coming up to you too quickly?

Woodbine was our lunch stop, and given that Captain Stan’s, the barbecue spot Chris had tantalized us with, was closed, that left us with just one restaurant to overwhelm. And we did, so much so that some of us even bused a few tables to keep things moving along. And gave the cafe several hundred dollars in extra business. #BikesBringBusiness

I spotted my sign of the day in the restaurant too:

We went even deeper into rural Georgia today, cycling on some roads that were so quiet we saw a vehicle only every 5 to 10 minutes. We’d been warned about logging trucks, but they left us in peace. There was plenty of logging, though:

Here’s the food offering at the gas station in Waverly. I admit I didn’t go in to inspect, but certainly not your usual Wawa:

And for an area that looked pretty empty, there sure are a lot of churches. I counted five signs at the end of this logging road: 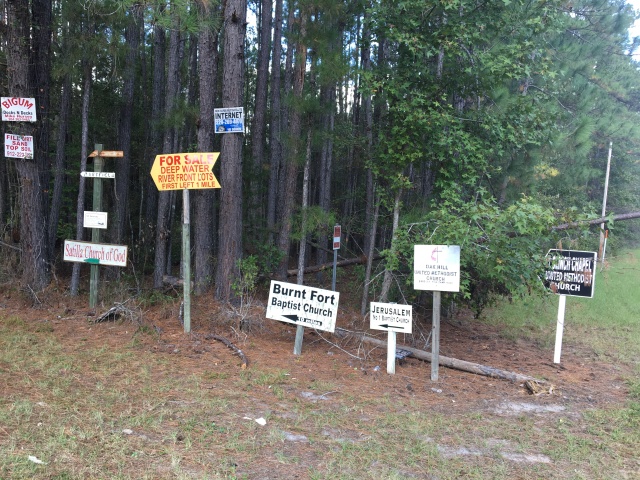 As we reached St. Mary’s, we saw a section of the East Coast Greenway under construction— yay! We also passed Naval Submarine Base Kings Bay and photo possibilities too irresistible to pass up. We think the tower might be real; the rest of the submarine was a form covered with asphalt.

Of course we had to scramble up. Bet the security cameras caught it all. We behaved, promise!

Want more? A fellow rider blogged about the day too. She liked the dessert sign too.

A gardener (along with the Brit) who has discovered there is more than hybrid tomatoes. And a cyclist.
View all posts by alliumstozinnias →
This entry was posted in bike ride, bike trail and tagged East Coast Greenway, Georgia, Georgia Coast Rail Trail, Jekyll Island Georgia, St. Mary’s Georgia, Woodbine Georgia. Bookmark the permalink.