Posted on September 22, 2018 by alliumstozinnias

Four years ago, I was on a bike ride from Wilmington, Delaware, that had us meandering through some industrial areas, navigating the traffic headed for I-295 and riding on Delaware highway 9 just to get to New Castle seven miles away. We met the governor at the time, a cyclist, and he bluntly told us that it wasn’t a great route … and that better was coming.

Better  has finally arrived, and it’s not just better, it’s fabulous: a trail from the environmental center in the middle of the Wilmington riverfront’s wildlife refuge all the way to New Castle. One beautiful bridge over the Christina River visible from I-95, two well-lit tunnels, under I-495 and I-295, one long boardwalk through the wildlife refuge, plus woods in another section. Great variety!

We did have to cross one fairly major road, but there are special pedestrian-activated lights to stop traffic. Today we had police doing it, since it was Trailfest to celebrate the completion of this project, and hundreds and hundreds of people of all ages came out to walk, bike, stroll, run, even kayak on a gloriously sunny day. 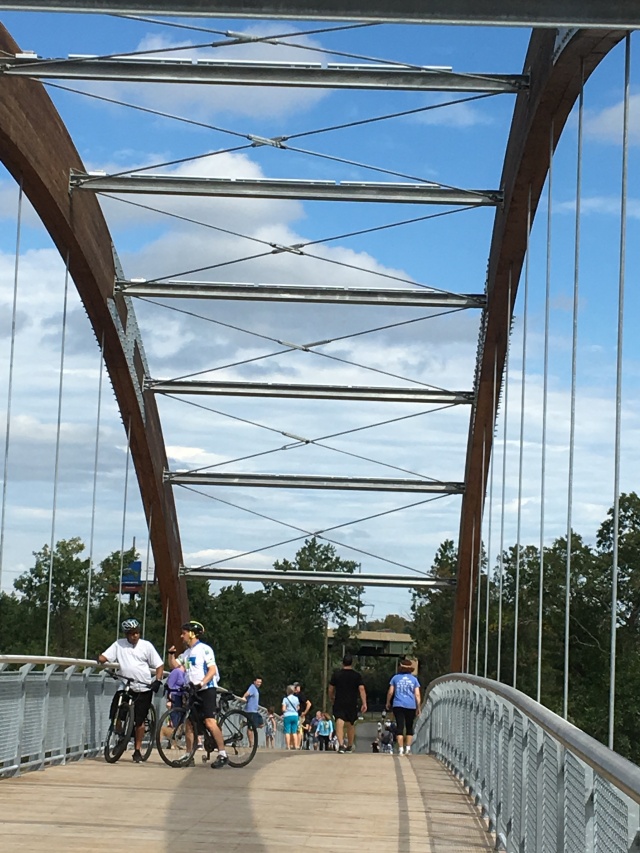 This new trail, called the Jack A. Markell Trail, after that governor, is a direct shot to New Castle, much more direct than taking the interstate. It uses an old railroad line, so it’s flat. And it incorporates another trail, called the Industrial Track Greenway Trail, that runs past some residential neighborhoods. I can only imagine people sitting in rush-hour traffic in view of the new bike-ped bridge enviously watching cyclists zip along. I bet it’s faster to bike the 8 miles from New Castle to downtown then than it is drive!

What an addition it is to the East Coast Greenway! (This is a 3,000-mile route connecting cities from the Canadian border in eastern Maine down to Key West that is currently about one-third on trails and another good chunk on quiet roads and roads with bike lanes.)

At the other end, New Castle, on the Delaware River, dates back to colonial times. The Swedes and the Dutch came before the English (that’s why you see their flags in the center square.) Downtown is charming, and I’m a sucker for brick buildings, but parts of town look like they’ve seen better days. Hopefully this trail helps bring it back, just as I hope the trail gives the condos and restaurants along the Wilmington riverfront a boost.

Trailfest gave us the chance to experience more than just the Markell trail, however, so we jumped at the chance to do a 50(ish)-mile ride. At New Castle, we turned south, along that infamous Highway 9 toward Delaware City. The plus: a generous shoulder the entire way. The negative: plenty of industrial areas, capped by a refinery a few miles from Delaware City. There’s no escaping the smell of natural gas there.

But in Delaware City, there’s another trail, this time along the Chesapeake and Delaware Canal. It’s called the Michael Castle trail in Delaware (Castle is another former governor), and when it crosses into Maryland, it’s the Ben Cardin C&D trail for the last two miles to Chesapeake City. We rode about 8 miles of a trail that is at least 14 miles long. It’s hard to not love a trail that follows the water.

Our rest stop and turnaround point was above the marina, next to a fun-looking restaurant with a big outside seating area. If I was riding the entire trail, I’d make a point of stopping here.

Some C&D trivia: the canal is the only major commercial canal amng those built in the early 1800s that is still in use. It’s 450 feet wide — wide enough to handle most two-traffic, and 35 feet deep. It cuts off about 300 miles for ships going from the Port of Baltimore to other ports along th East Coast and to Europe. We didn’t see any today, just recreational power boats and jet skis.

I also learned there’s a seasonal ferry from Delaware City to Fort Mott, NJ (in Salem County), for those who want to try for a three-state ride.

If you’re looking for another Delaware option, I’ve written here about biking in the Lewes-Rehobeth Beach area.

A gardener (along with the Brit) who has discovered there is more than hybrid tomatoes. And a cyclist.
View all posts by alliumstozinnias →
This entry was posted in bike ride, bike trail and tagged Chesapeake & Delaware Canal, Delaware, Jack A. Markell Trail, Michael Castle Trail, New Castle Delaware, Wilmington Delaware. Bookmark the permalink.