We’re kicking off a two-nation bike loop with a day along the water.

Vermont’s Champlain Islands, which string through Lake Champlain, are a lovely area to bike in, with quiet roads even in July. We generally stayed off U.S. 2, the main road, reconnecting with it shortly before the causeways that let us hop from island to island. The flip side of that is we didn’t see much in the way of services, beginning with easy places to grab a bite, North Hero excepted, as well as our B&B that has a restaurant. And a supermarket? Didn’t see one.

Our 61-mile ride started in St. Albans, Vermont, a half-hour northeast of Burlington. I admit this wasn’t our first choice. We’d wanted to start in Colchester, closer to Burlington, and take the Island Line Trail and the tiny ferry into South Hero Island. But a nor’easter damaged the causeway in May, and at one point it looked like the ferry would be out for the season. That turned out not to be the case, thanks to fast work getting some emergency federal money for repairs, but we’d already switched to a hotel in St. Albans. It meant a slightly longer first day and a much shorter last day. And someone had done the route mapping for us! Bonus for those without a car: Amtrak’s once-a-day Vermonter line ends in downtown St. Albans, and it has roll-on, roll-off service for (just) three bikes.

As you can see, I opted for my road bike, though I changed the tires to better handle some unpaved trails. And I packed light. Very light.

Bicycling along the Champlain Bikeways

Our first 20 miles were rolling hills on quiet roads that took us first to St. Albans Bay and then a bit inland, past dairy farms and to the short climbs. All in all, we had less than 700 feet of climbing, but make what you want of one stretch being called Everest Road. We spotted signs for the Champlain Bikeways for part of the ride but lost it at some point. (And those signs give no indication of distance or even just the name of the next town you’re biking toward, so their usefulness is limited.)

Then it was onto U.S. 2 for nearly 5 miles to cross to South Hero Island. There’s a wide shoulder, but you’ve still got trucks speeding past you. We took the first left once on the island and it was back to quiet.

The route took us to the western side of the island and a forest of brightly painted bird houses (and a couple of dinosaurs). Here’s the back story: the area is swampy, which means mosquitoes. Two residents were looking for ways to fight the bugs in this swampy area and learned that tree swallows will feast on them. They built 20 birdhouses that first year, and all were quickly occupied. Tree swallows return year after year, so they kept building, aided by contractors donating their scraps. And now there are more than 800 houses. Must work, because we didn’t get bitten!

Spot the dinosaurs in the photos! 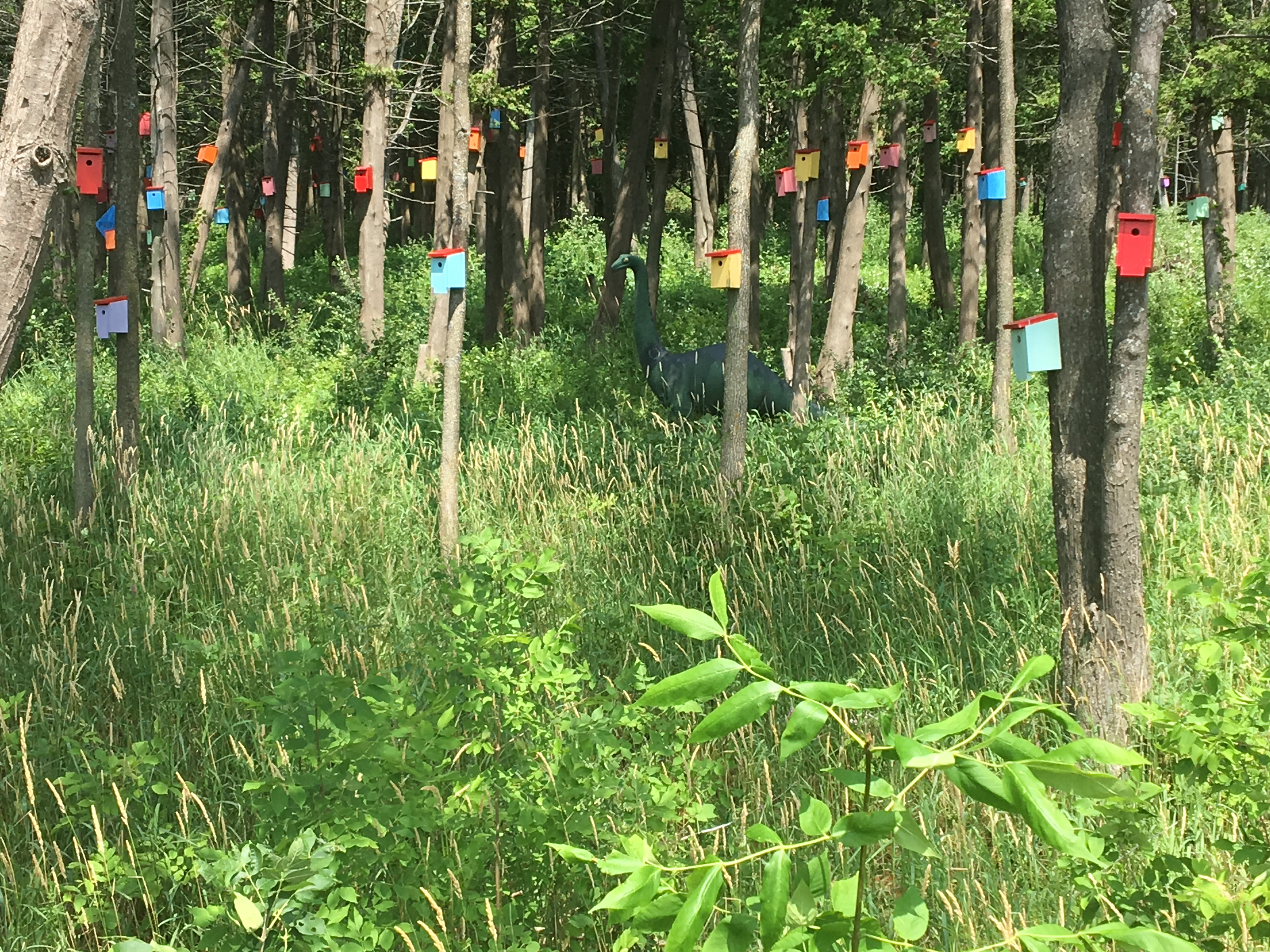 Seemingly just around the corner was our next stop: Snow Farm Vineyard. We were quite surprised to discover that it grows its own grapes (its website describes the growing season as identical to Burgundy, thanks to the microclimate.) And its dry Riesling was quite nice. Unfortunately, it only comes in full-size bottles, and when you are cyclists you can’t just carry everything… especially on carbon bikes. So we went for the only wine sold by the half bottle, an admittedly not as nice (to me) red.

Our next (forced) stop was one we could have skipped — a cloudburst. Given the rural nature of the islands, there aren’t many obvious places to hide out, especially when that black cloud comes upon you pretty quickly. No bridges. No picnic shelters. We did stop, thougwere somewhat protected by the tree canopy. Thankfully it was brief, no more than 15 minutes. And we can now say that our rain jackets and panniers/bikepacking bag are up to the task.

Our day ended at Ransom Bay B&B, a bike-friendly business that put us a handful of miles from the Canadian border. It’s also not far from a short rail-trail that seems overgrown and forgotten, at least in the summer. Perhaps it’s popular with snowmobilers.

A bizarre fact about Alburgh, population 2,000: it’s the site of the first intercontinental ballistic missile east of the Mississippi, and the hole, located near today’s welcome center, is 17 stories deep. The Atlas missile that arrived in 1962 was superseded by the Titan missile, which has too big for the launch site, by 1967, and that was the end of that. The last news story about the site talks of someone wanting to create a solar field on the land around the sealed-up hole. We didn’t follow the road, though, so I can’t say what’s happened.

And now you know the story behind this weathervane. 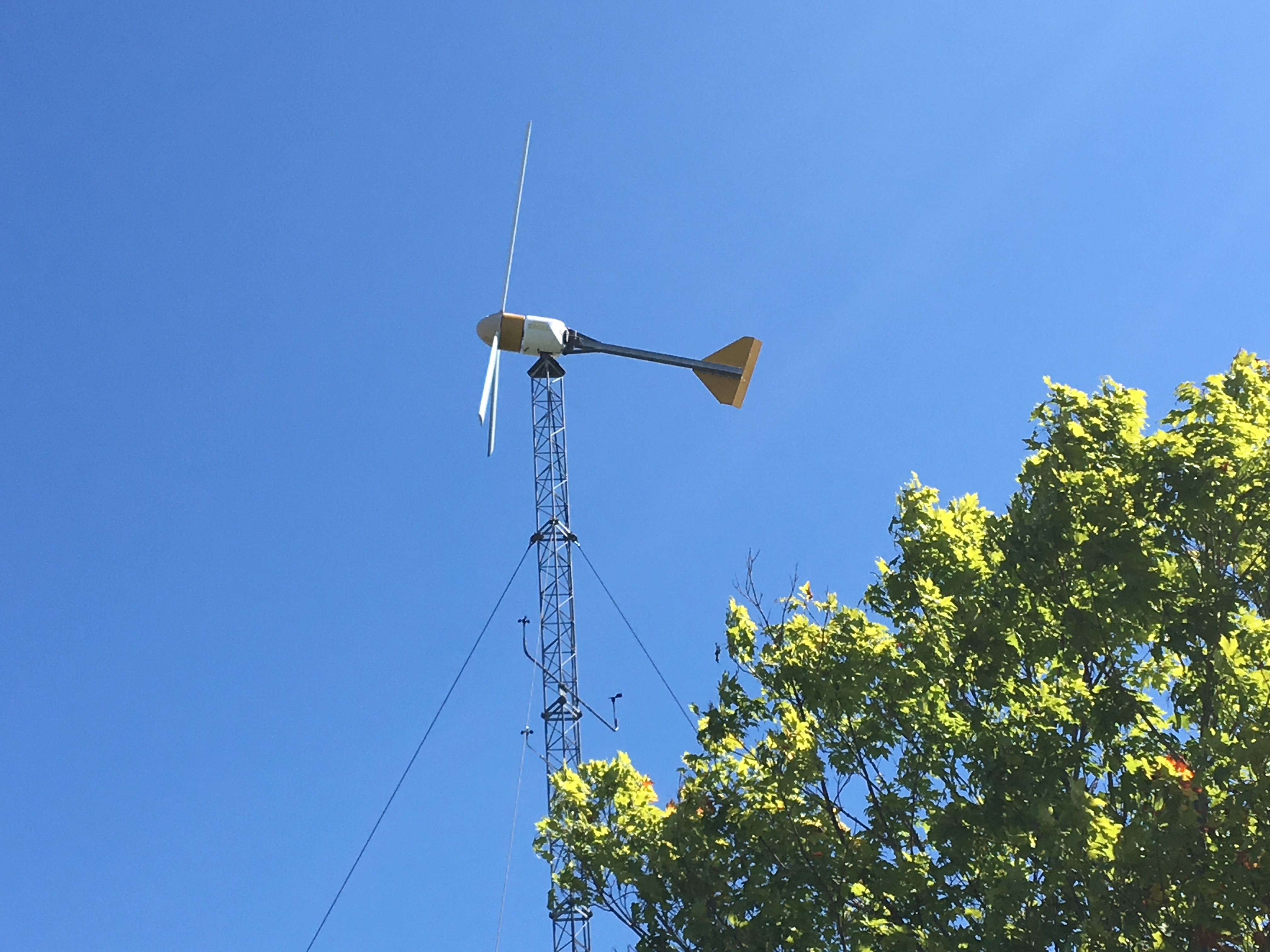 We crossed the border the next morning and spent 3 1/2 days along the Route Verte in Canada. Read about it here.

A gardener (along with the Brit) who has discovered there is more than hybrid tomatoes. And a cyclist.
View all posts by alliumstozinnias →
This entry was posted in bike ride, bike trail and tagged Alburgh Vermont, Champlain Bikeways, Lake Champlain, St. Albans Vermont, Vermont. Bookmark the permalink.