Giggles and squeals on an e-bike

Posted on March 6, 2018 by alliumstozinnias

Wow was that fun! Kind of like you imagine one of those speeder bikes in “Return of the Jedi.”

OK, not quite that fast. And this bike was on the ground, not going through the air. But as long as you pedaled, it felt like you could fly thanks to the electric battery that provided a boost. That first time on an e-bike, I felt the assist kicking in — and it was set at the lowest level — and I couldn’t help but laugh with glee, like a kid building up speed going downhill. Me, who thinks motorcycles are scary.

But there I was, accelerating quickly thanks to the the rechargeable battery tucked behind the stem leading to the seat. After a few loops around the bike shop parking lot, it was off to the street. Just with that minimal assist, I went up a hill at 10 mph with no effort. And if you’re starting cold at the bottom of a hill? Flip the throttle for a second or too and the assist kick-starts the ascent. Just hold on for the jolt. Who needs to huff and puff? Or even change gears? Wow.

Then we headed to a quiet road behind the bike shop, experimenting with the different levels of assist. The model I was riding, the Blix Stockholm, has four levels that you can essentially toggle through (plus zero, for no assist) on the left handlebar, plus nine gears you can change like a normal bike just off the right handlebar.

I’m sure there’s a great balancing act between what gear you’re in and how much of an assist you take to stretch out the battery charge. To be honest, I felt level 1 was enough — and that was a 53-pound bike. Kick it up, and not even to level 4, and I could top 20 mph, no sweat. 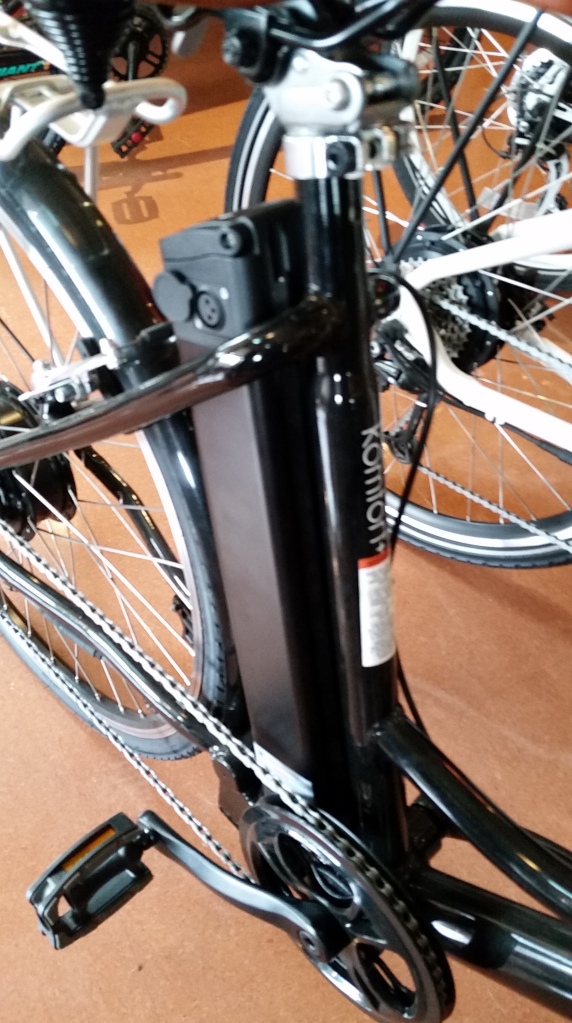 This one tucks the battery behind the seat post.

So who buys an e-bike? The shop owner says they’ve sold a lot of them, almost always to people over 55. Sometimes it’s a bike widow/er who now can keep up with the other half. Often it’s someone who wants to exercise but finds it all so daunting. Especially if you live in a hilly area, which is where this shop is. You might not be powering yourself at 15 mph on a carbon-fiber bike that’s half the weight (and sometimes close to half the price), but you only get the assist if you’re pedaling — so you have to move. The owner told us of one customer who weighs about 300 pounds who has seen the numbers in his blood work come down substantially, even if his weight hasn’t. That’s the power of moving, of getting some exercise.

OK, the price is pretty hefty — this one was $2,300 in 2017, and the Brit was riding a $3,000 model. But I can see how this could turn you into a one-car family, using the bike to get to work just about every day if you have a reasonable commute. And when it rains? If you can’t hitch a ride with a co-worker, a cab (or Uber/Lyft) might not be a bad deal, especially given how much you save by not owning that second car.  (You really don’t want to know the true annual cost of car ownership.)  States still have to work out just how they view e-bikes — a bike or something more? There’s no assist if you don’t pedal, so it’s certainly not a moped). There’s also the question of limits on speed and power.

But my money is on prices coming down and batteries becoming lighter and more powerful, just like with phones and electric cars.

And who knows? One day I might own one too.

(Apologies for the delay in posting this one. We tested the bikes last winter.)

A gardener (along with the Brit) who has discovered there is more than hybrid tomatoes. And a cyclist.
View all posts by alliumstozinnias →
This entry was posted in bike ride and tagged electric bike. Bookmark the permalink.