Posted on October 10, 2017 by alliumstozinnias 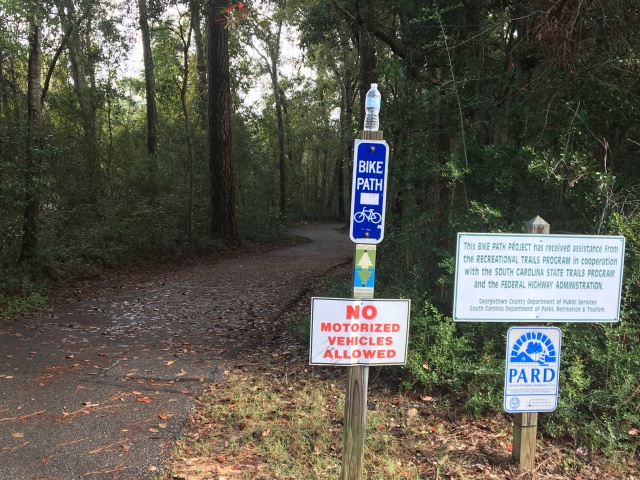 And note to the rest of South Carolina: A bicycle trail doesn’t have to be super fancy.

We rode for many miles today along the Waccamaw Neck Bikeway. Sometimes it was parallel to Highway 17, hidden in the woods with some nice curves but certainly not out of hearing range (and sometimes eyesight) of all that traffic. At some points, it turned narrow and bumpy because of tree roots pushing up. While that just slows down cyclists, it does make that portion unsuitable for those in wheelchairs. And, given the area, golf carts too.

It made us think of where we’d ridden on Sunday and Monday where we had biked long stretches of busy roads with unused land just off to the side that could be turned into a simple trail/sidepath. And that would let workers without a car have a basic but safe way to get to work at all the strip malls we passed.

Given the good number of people biking on this trail on a Tuesday morning, I’d say this isn’t just some luxury. We called out “bikers up” more often than we have all week — shorthand for move over to the right so oncoming cyclists have half the trail to go by.

(Just wish there had been some signposting for the Brookgreen Gardens. One group found it and spent hours there.) 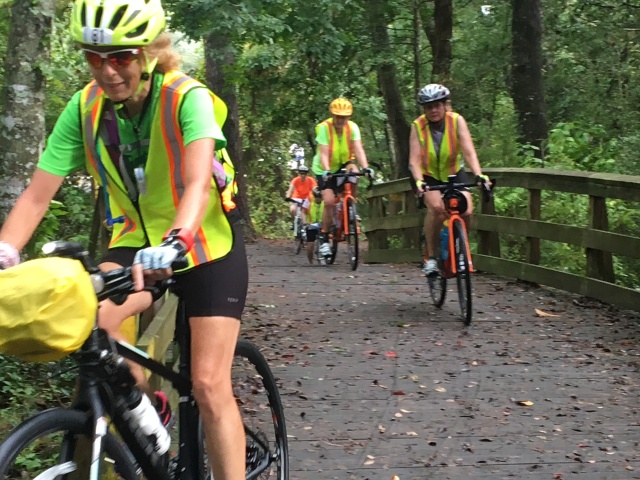 Other sections were along newer developments along golf courses — wide enough for getting to the neighboring golf course on your cart, if you desire. (We only saw someone using the trail in a golf cart at the beginning of this section.) While some might object to this use on a multi-use trail because of conflicts with cyclists, walkers and runners, I believe you have to be pragmatic. If those driving golf carts aren’t going to take to the road and their support is what gets politicians to build the trail, accept that reality. Better a trail than no trail.

One more nice thing about the Waccamaw Neck trail: it connected to the library, a shopping center, a middle school and an elementary school. Real destinations! So it was cool to hear a little boy at recess yell out “there’s a bike train” as we rode by. Maybe he rides his bike to school that way?

Just too bad it ends about 9 miles shy of Georgetown and forcing us to use a busy road. Supposedly the plan is to expand it all the way to the bridge leading into Georgetown and creating a 27-mile trail. Can’t happen soon enough! Only 14% of the East Coast Greenway in South Carolina is on trails, so there is plenty of room for improvement.

A gardener (along with the Brit) who has discovered there is more than hybrid tomatoes. And a cyclist.
View all posts by alliumstozinnias →
This entry was posted in bike ride, bike trail and tagged South Carolina, Waccamaw Neck Bikeway. Bookmark the permalink.