Bikes, beer … and church? Discoveries in Delaware and New Jersey

Posted on August 26, 2017 by alliumstozinnias

Even I, who am hardly a beer drinker, know that bikes and beer seem to go together.

Two experiences this month make me a believer.

A brewery on the bike path in Delaware

The first sign was literally a sign outside Rehoboth Beach, Del., home of behemoth craft brewer Dogfish Head Brewery. We were riding an 18-mile loop via Lewes and the Junction and Breakwater Trail when this appeared before us:

We debated the hidden meaning of the cross. And the sword (I went with King Arthur and Excalibur). Plus the name.

There was only one way to find out: to walk past the true believers in the beer garden and into this oversized steel shed of a building that certainly doesn’t signal a traditional house of worship … and ask.

And yes, there really is a church connection. Revelation Craft Brewing Co.‘s original plan was to use a decommissioned (or perhaps desacralized?) church for the microbrewery. That fell through for reasons I didn’t get (but may yet happen).

But that’s not the only story behind the name. The beer should “reveal itself” as you drink. And like all these new breweries, they are trying a few ways to stand out. (I would go for the Berliner Weisse with either strawberries or peach versus, oh, the smoked oyster stout — made with local oysters, of course.) Clearly some feel the taste is quite a revelation. 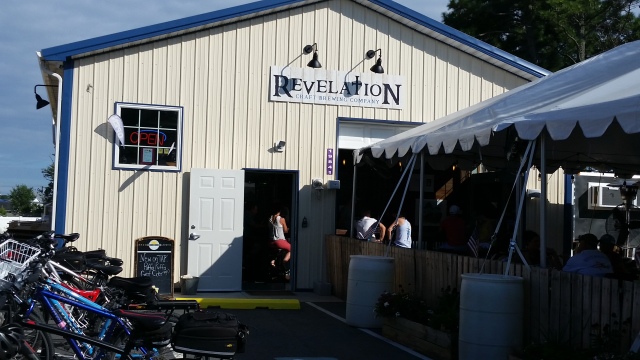 Our second sign came today, when we finally made it to Screamin’ Hill, New Jersey’s only farm brewery, when it is open (and at 10 hours a week, that’s not much more than some churches). We’d ridden by several times on Sundays … one of the five days each week that it is closed.

And where does this name come from? One of the local hellraisers many, many years ago who one day repented for his numerous sins, became a preacher at the church just up the road (that happens to be the top of the hill) and whose sermons had a reputation for being so loud that the hill became known as Screaming Hill.

No one was screaming when we were there. But it certainly was busy. The parking lot (which admittedly isn’t very large) was already full, and it wasn’t even 1 p.m. (It opened at noon.) Various regulations mean it’s a bring your own food place, which is a nice flip on Jersey’s many BYOB places. People had brought coolers full of chips, salsas and more to pair with the beer and just enjoy the sunshine. I spotted one pizza box, which would also be my idea — if I wasn’t arriving by bike. Alas, all we had were a couple of Clif bars.

We ran into a quite few other cyclists. A woman asked if I was an Anchor House rider because it’s been 4 years and I still haven’t taken off the name tag from the bag hanging off my seat bag. It turns out we both rode the same year, only she has stayed with it (read about that ride on my blog from that year). A man in a Brooklyn Brewery cycle jersey started talking to us about rides in the area, but then a woman who handles memberships for the Bicycle Coalition of Greater Philadelphia broke in because I was wearing an East Coast Greenway jersey, and that conversation continued until they announced a brewery tour. And on our way out, we crossed paths with two cyclists from our town (strangers) who’d just biked out for the first time too.

Honestly, I’m surprised there weren’t more. Where are you, club riders?

When we arrived, there were nine beers on tap, but that wasn’t expected to last long. The place can barely keep up with demand, and it has outgrown its space, as we saw on our tour. (Another building is planned, on another part of the farm.) They can make up to six beers at a time, and each takes 14-22 days, depending on type (average is 18 — one more of those facts we learned on the tour.) It’s a farm brewery because it gets its wheat, rye and much of its barley from the 500-acre farm it sits on, plus other ingredients like habaneros (butterfly them and toss in for the final 10 minutes or so), raspberries (that would be my beer, though it wasn’t a Belgian style lambic) and pumpkin.

As you can see, there’s not much extra storage capacity.

To all those supporting me on the East Coast Greenway ride in October (oh yeah, here’s the fundraising link): want to ride out one day with us? Just need to find a SAG volunteer for the pizza.

A gardener (along with the Brit) who has discovered there is more than hybrid tomatoes. And a cyclist.
View all posts by alliumstozinnias →
This entry was posted in bike ride and tagged beer, Delaware, Junction and Breakwater Trail, Lewes Delaware, New Jersey, Rehoboth Beach Delaware, Screamin Hill Brewery. Bookmark the permalink.

3 Responses to Bikes, beer … and church? Discoveries in Delaware and New Jersey