Hopscotching across the state of Mississippi

Posted on March 20, 2017 by alliumstozinnias 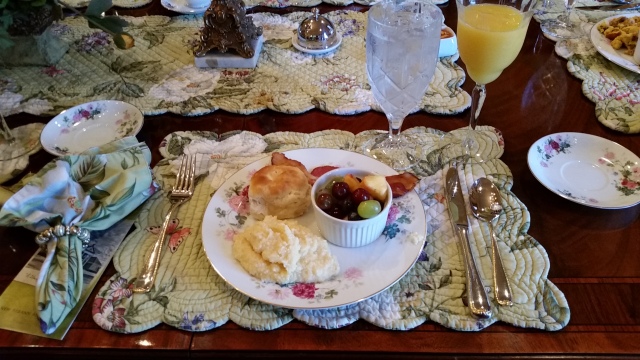 (It’s always about the food isn’t it? Much nicer than my usual style!)

I’m getting away from a northern winter to join a small group exploring Mississippi on a bike. And no, this is not part of the East Coast Greenway.

Now Mississippi is a long state (more than five hours to drive from the state line with Memphis down to the Gulf of Mexico) and we only have four days, so I admit there’s some assists coming via a car. We’re going to skip some of the more obvious tourists sites (sorry Tupelo, Oxford and Natchez) and instead spend a good chunk of time on rail-trails you may not have heard of. And yes, the Natchez Trace.

As a Northener who has spent less than 24 hours in Mississippi until now (and that was only in October), I was shocked to learn this deep-red state has a pretty new 43-mile rail-trail that opened all at once. Quite a feat! Then we hear that the time between the railroad abandoning the line to Tanglefoot Trail opening was just 10 years (eight years if you start counting from the first meeting), and we’re all stunned by the speed. Oh, and it’s asphalt, so a lot more expensive than crushed stone.My town struggles to just put in sidewalks along a road to the train station (we’re starting year 5 – it could happen this year for the first five or six homes.)  And before you ask, 80% of the money came from the federal government (grant). Someone knew how to push the right buttons.

I intend to find out the full story — but I’m already hearing about the trail’s economic impact.

So here’s the basic itinerary:

Day 0: I’m on a rental bike because I couldn’t deal with shipping my bike and then needing to ship it back. But the others have brought their various fold-ups and spend time after dinner reassembling their bikes at a beautiful B&B while I … chat (what a surprise!).

Day 1: 43 miles on the Tanglefoot Trail (New Albany to Houston).

Day 2: 35-mile loop involving the Natchez Trace Parkway from Ridgeland, a bike-friendly suburb of Jackson, the state capital. Then another 27-mile section of the Natchez Trace from Rocky Springs to Windsor Ruins (what a name for a town!). The Natchez Trace is run by the National Park Service and runs from Nashville to Natchez. Until now, it’s the only place I knew about biking in Mississippi, and it’s a 50-mph road.

Day 3: 16 miles around Vicksburg National Military Park (can I just say I love the National Park Service?) and then 41 miles on the Longleaf Trail from Prentiss to Hattiesburg

Total is 200 miles, and no coincidence that this is Mississippi’s bicentennial year.

A gardener (along with the Brit) who has discovered there is more than hybrid tomatoes. And a cyclist.
View all posts by alliumstozinnias →
This entry was posted in bike ride, bike trail and tagged Longleaf Trail, Mississippi, Natchez Trace Parkway, Tanglefoot Trail, Vicksburg. Bookmark the permalink.