Posted on August 7, 2016 by alliumstozinnias

One of the great things about the East Coast Greenway Week-A-Year ride is meeting passionate volunteers. Peter Garrett is one of those. This soft-spoken Brit has lived in the Waterville area for nearly 40 years and has spent more than a decade building 40 miles of trails in Waterville, Winslow and surrounding towns for the astoundingly low cost of about $2.5 million (this article says $4 million, which is still cheap).

Peter has learned to be both patient and persistent. As he took a group of us along the Rotary Centennial Trail and the connecting East Kennebec Trail, he told us how his group, Kennebec Messalonskee Trails, asked the railroad if it could buy some land along the river that was no longer being used. It was told no .. and several years later, the railroad donated the land. Now I’m sure he left out a few details of how this gift came to be, but it is now a flat, grass-covered trail mowed by a volunteer we were introduced to.

If I’m remembering right, not only was the land donated but the company put up a fence at its own cost (rather than requiring the trails group to pay for it) to separate the trail and company land.

The surface on other parts of the trail was hard-packed soil or crushed stone, all at least as smooth (and sometimes more so) than the D&R Canal towpath near me that is a long section of the East Coast Greenway. Certainly none of that reddish-brown dust that caked my bike a month ago! And it was lovely to be in the shade (something we appreciated even more as we biked down U.S. 201 with none) and get a break from hills.

Peter is second from left

I thought: who is this for? As a cyclist, I think of the East Coast Greenway one way, but it’s also for runners, walkers and more. And even among cyclists, road warriors would look at it one way (they stick to the roads), touring cyclists another and recreational cyclists yet another. Do I personally prefer paved? Yes, because my road bike likes that better, though I then curse the bumps created by tree roots. Still, I took it on unpaved trails in Connecticut. I just can’t go as fast (and probably shouldn’t even on paved trails, the better to share with walkers and their dogs). But my hybrid can take anything. And give me these surfaces over the C&O Canal! I liked these trails.

If I was hiking a section of the East Coast Greenway, I would love this. There were scenic vistas and even a place to sit and eat. If I was running, ditto. And we saw a woman running alone, a sign that safety isn’t a concern. Is it wheelchair-accessible? Certainly the area where we exited isn’t — too steep, perhaps, and I would definitely pave it to avoid deep ruts from the rain flowing downhill. (We walked up — but that was no more than 10 yards.) 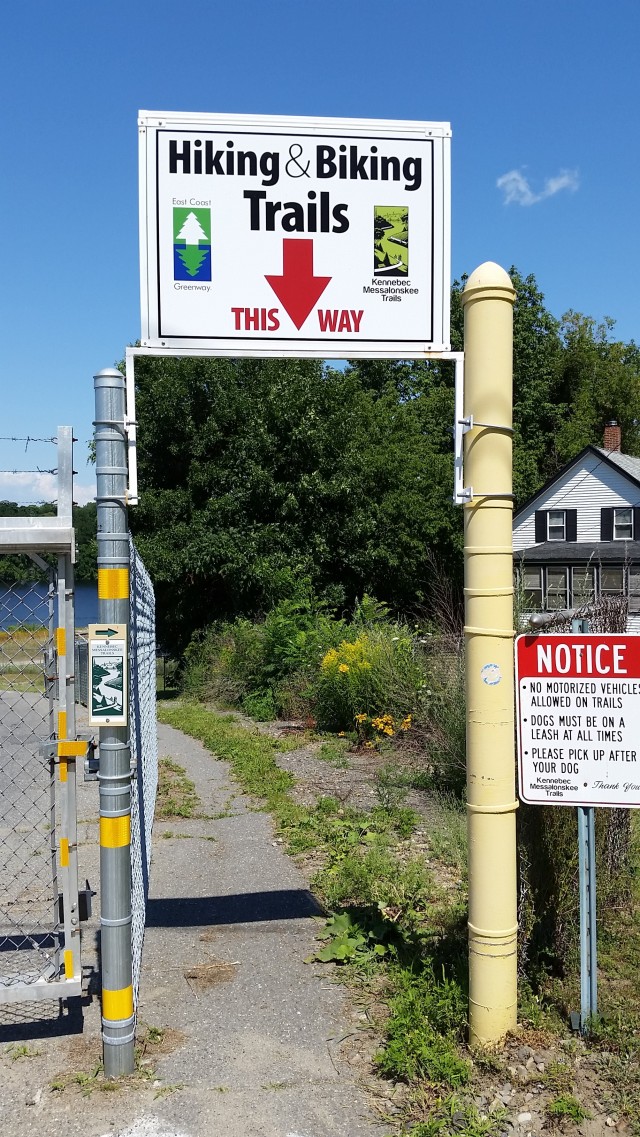 Can’t miss this! This is where we exited.

You can see only a tiny bit of the fence on the left. It’s an automated gate put in by the business next door (the railroad? remnants of the paper mill?) to keep trail users from parking on its property. Peter tells the story better, but it seems like more proof of how this community group works well with others.

I like that the trails connected to the schools. Does it mean it meanders a bit for a through-rider? Yes. But the added distance really isn’t much, and you could have jumped back onto the road for what I expect is less than half a mile if you wanted to skip that.

Peter’s trail is an “orphan” trail and not part of the main route. But given that tourism and the economic boost it provides are among the selling points for this national trail (and, of course, encouraging exercise as part of a healthy lifestyle), it seems to me that if it doesn’t become part of the main route, it should be listed as a loop or spur. The same goes for Donna’s Air Line South trail and the Lawrence Hopewell Trail near me. After all, the more there is to bike in one area, the more likely you are to linger or plan a weekend around it.

Peter’s group has great ambitions to connect to the Waterville side of the river using old bridge pilings. It’s a long way across, but given what this group has already accomplished, my money is on this one day happening.

The route that exists today led us to the Two-Cent Bridge, an unusual pedestrian suspension bridge that is more than 100 years old — and which Peter and co. got fixed up and re-opened. The name comes from the two-cent toll to cross the bridge.

Look at the fun sculpture (wearing my bike helmet) and bike rack on the Waterville side!

Not only did Peter show us his trails, but he played tour guide from Unity to his trails, entertaining us with little stories along the way.

If you like reading about passionate advocates, I’ve written about others here and here.

A gardener (along with the Brit) who has discovered there is more than hybrid tomatoes. And a cyclist.
View all posts by alliumstozinnias →
This entry was posted in bike ride, bike trail and tagged East Kennebec Trail, Kennebec Messalonskee Trails, Peter Garrett, Rotary Centennial Trai, Waterville Maine, Winslow Maine. Bookmark the permalink.