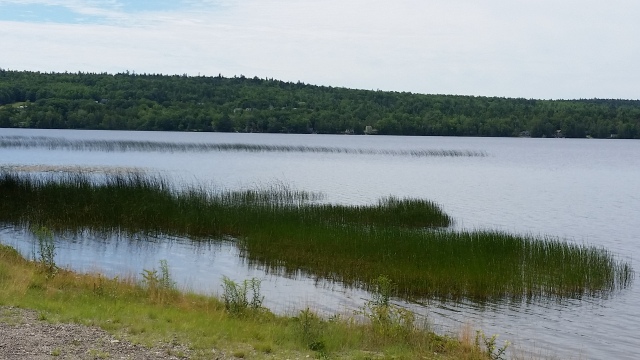 This was a wonderful first day of our East Coast Greenway ride in Maine — comfortable temperatures (perhaps it topped 80) and low humidity (especially compared to the heat dome we left behind). The hills were generally undulating and the uphill looked worse from the top of the previous hill than they actually were. They also seemed shorter than the ones at home and only rarely did we have to work hard in our lowest gear. The “official” estimate is we climbed 1,874 feet.

We started with a gathering of local and regional U.S. and Canadian officials near the border (more on that in another post), then headed closer for our own shot of the border. I’m glad we walked over last night because there was no way we were going to convince part of the group to wait for the others to go over and back. As it was, the American border agents didn’t take too kindly to a few of us going halfway across the bridge for a photo and then walking back — and not crossing over to go through U.S. customs. Thankfully, they said that since they had seen us, it was all OK … just don’t do it again!

Apparently they don’t take it easy during the international festival the two towns have. The parade from one side to the other? Get pre-approved if you want to do the whole thing.

This is most of the group well away from the bridge crossing, with Canada across the river. Notice the day’s uniform? 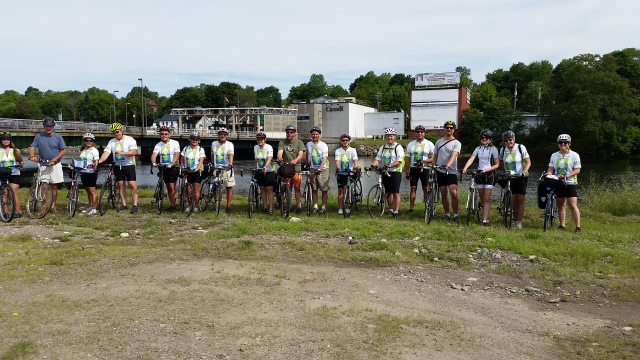 We found our welcome to Maine sign a few miles later, after we’d passed the turn-off for the last of the local crossings. The waves are to the friendly motorcyclists passing by who had also spent the night at the Calais Motor Inn.

Can someone photoshop “and bikes” to the bottom of that “open for business” slogan?

Signage was generally great — both for the East Coast Greenway and Adventure Cycling’s U.S. Bike Route 1. Our cue sheets really were more of a backup than anything else. Maine DOT has done a fabulous job!

We crossed the Down East Sunrise Trail quite a few times. 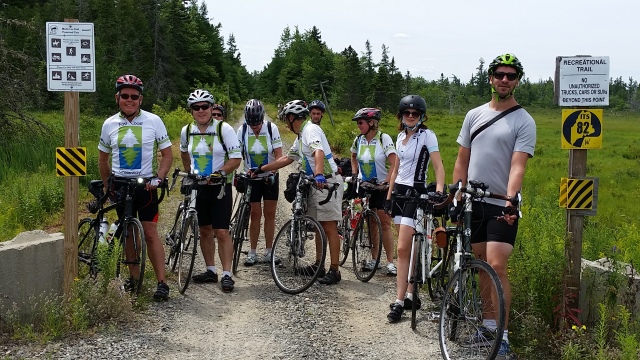 But we made the right choice — the surface is great for ATVs and snowmobilers but awfully bumpy for a cyclist. One of our Mainers told us it’s also plagued with black flies — and our few encounters with them were bad enough.

This was supposed to be a 46-mile day. Where did the other 3 come from? Two are the ride to the border and back. The third is a math mistake on the cue sheets — somehow it added just 0.2 instead of 1.2 miles for one stretch of roadway. Stuff happens. And it was no big deal.

A gardener (along with the Brit) who has discovered there is more than hybrid tomatoes. And a cyclist.
View all posts by alliumstozinnias →
This entry was posted in bike ride and tagged Calais Maine, Down East Sunrise Trail, East Coast Greenway, Machias Maine. Bookmark the permalink.

2 Responses to Day 1 — 49 miles from Calais to Machias