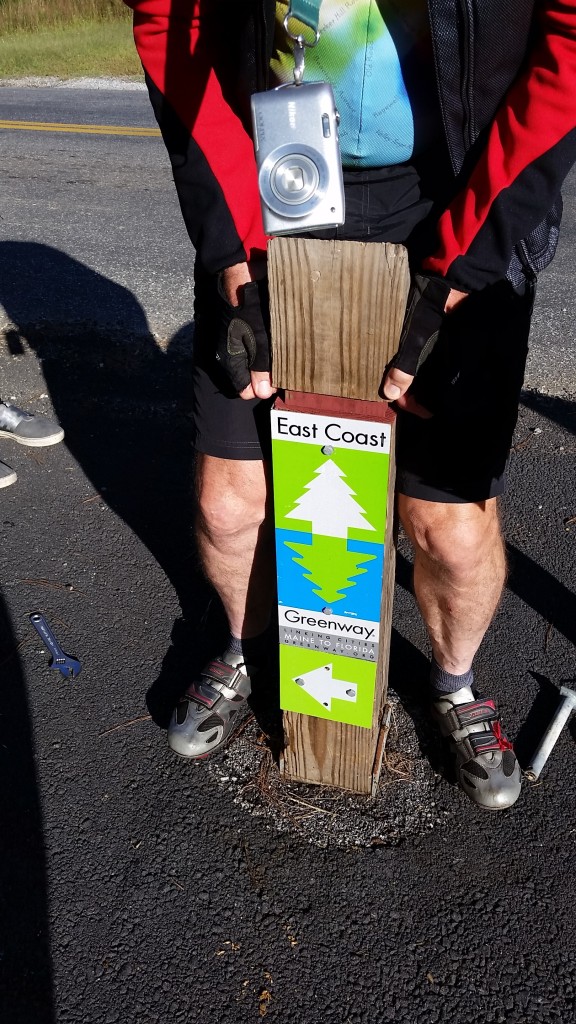 One of our riders has a sharp eye for the little stuff — in this case, East Coast Greenway arrows that pointed the wrong way. It was at the end of the off-road section of the Tobacco Heritage Trail as we reached South Hill on Tuesday night, and Rob Dexter vowed to fix it on Wednesday morning. I volunteered to come along to document this, and before I knew it we had become quite a little group.

Basically, the wooden bollard that keeps motorized vehicles off the trail had been put in backwards at some point, most likely when it was pulled out another time. The Tobacco Heritage Trail sign on the sloped part was facing the trail instead of the road, so those riding to the trail couldn’t see it. That meant the East Coast Greenway arrows were off too. So it was just a “simple” matter of someone (in this case, he-man Andy Hamilton) lifting the bollard out of its slot, giving it half a turn and putting the metal rod back in place.

A gardener (along with the Brit) who has discovered there is more than hybrid tomatoes. And a cyclist.
View all posts by alliumstozinnias →
This entry was posted in bike trail and tagged East Coast Greenway, South Hill Virginia. Bookmark the permalink.