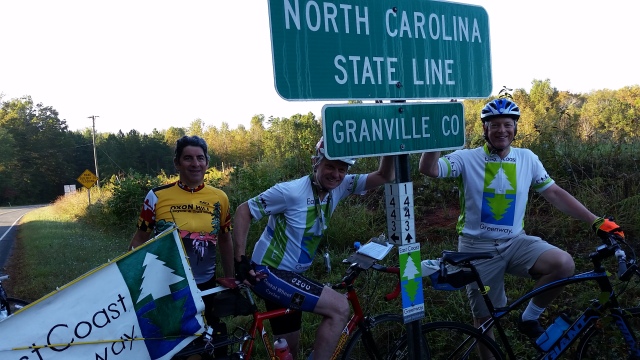 Today we finally reached another state!

Once again, we had a lot of quiet country roads, at least for the first half of the 61-mile day. But unlike Virginia, the route was well-signposted with East Coast Greenway markers. So nice not to be wed to our cue sheets! (Why almost no signs in Virginia? The explanation is after all the photos.)

We also had a special North Carolina welcome from Mary, who actually lives in Virginia and was part of our Tobacco Heritage Trail welcome back in Lawrenceville two days ago. Just after crossing the state line, this man was waving us over to the left. I was thinking: “doesn’t the route go straight?” But a bunch of us followed his directions anyway, into a park, and there was Mary. She’d set up a table with Gatorade, granola bars and even a vase of flowers. Behind it was a lake and her favorite view.

What a wonderful thing to do for us! And love that Virginia-North Carolina bike flag! 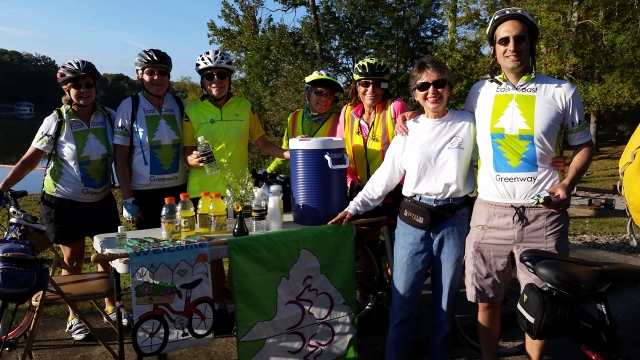 The area in front of the orange rope/marker is the swimming area .. only thanks to Joaquin, there is no beach. The depth markers show the lake is 11 feet deep at the orange marker. Before the storm, it was just two feet deep, she told us.

As nice as those quiet country roads are, we got a look at what the future of the East Coast Greenway. The vision is to convert this abandoned railway line from Clarksville, Va., to Oxford, NC, (our halfway point) into a rail trail.

Back to those East Coast Greenway signs. Why are there none in Virginia outside of Richmond? The explanation I got is that that Virginia DOT requires outfits to use a particular sign company and to have an expensive maintenance contract with that firm. The only way around is to be a VDOT program. And being recognized by the Department of Natural Resources as one of the state’s half-dozen long-distance trails doesn’t cut it.

So Adventure Cycling, whose U.S. Bicycle Route System is being developed with the American Association of State Highway and Transportation Officials, gets its U.S. Bike Route 1 and 76 signs, and the East Coast Greenway (which prefers trails) still has to jump through some more hoops to be signposted on quiet roads.

A gardener (along with the Brit) who has discovered there is more than hybrid tomatoes. And a cyclist.
View all posts by alliumstozinnias →
This entry was posted in bike ride and tagged East Coast Greenway. Bookmark the permalink.