Posted on October 11, 2014 by alliumstozinnias

On this ride, I met several people who have found their own ways to promote the East Coast Greenway.

There’s Barb and Bev from Connecticut, who say they ride so that their grandchildren will be able to enjoy a safe East Coast Greenway from the Canadian border down to Key West.

Each keeps a box on the trail or a trail spur stocked with information about the East Coast Greenway. (Bill from Connecticut, one of the fathers of the Greenway, also has a box). Every month, about a dozen cards get taken from each. Awesome idea!

Rob, also from Connecticut, rode all week with his East Coast Greenway flag flying from his bike. How could anyone miss him? 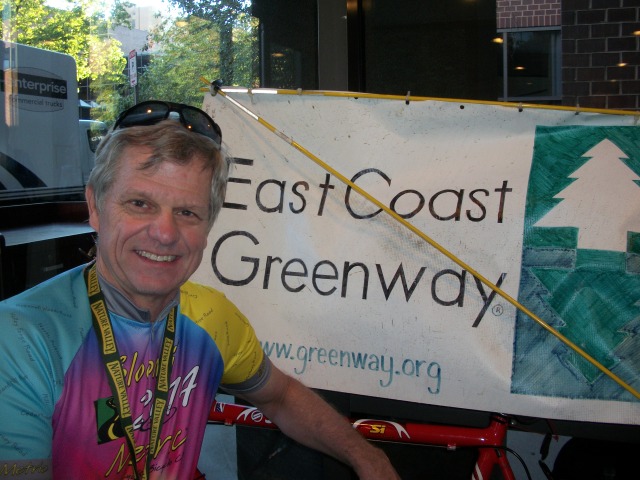 I was also impressed by Chuck, who is working to get the Octorara Trail built in Pennsylvania’s Delaware County. News on a grant for a feasibility study should come soon, and the vision is for the trail to eventually to connect to Chadds Ford in the heart of the Brandywine region. It would also eventually connect to the East Coast Greenway via the Chester Creek Trail. I know how hard it is to get a sidewalk added on a busy road, and getting a trail built is lots and lots more work, even if you have the Bicycle Coalition of Philadelphia and its Connect the Circuit vision behind you. Chuck rode with his son and is one of the many faces in my photos.

A gardener (along with the Brit) who has discovered there is more than hybrid tomatoes. And a cyclist.
View all posts by alliumstozinnias →
This entry was posted in bike ride and tagged East Coast Greenway. Bookmark the permalink.